During the last month I have read a couple reports from analysts in two major investment banks claiming a correction in U.S equity markets is not likely mainly because of loose monetary policy from FED and P/E ratios from U.S equities being below average.

In my modest opinion, regarding the first statement, I believe U.S equity markets can still go up some time if FED keep on stimulating markets with an expansive monetary policy (either via lowering rates or introducing QE), but they will go up artificially and, at some point, they should end up correcting (probably if the economy starts to slowdown despite stimulus or as monetary policy becomes less accommodative).

Regarding the second statement, when these analysts say “P/E ratios are below average”, my question is: what´s the lookback period in your average?. If we take into account the past 10-15 years, we agree P/E ratios are below average (picture 1). However, if we increase the lookback period to the past 130 years (picture 2) we may conclude with 3 points:

P/E ratios are mean reverting and we can establish a lower threshold in 5 and an upper threshold in 20 in order to consider a low P/E or a high P/E (from a historical point of view, of course).
Taking into account P/E´s mean reverting nature and noticing we are currently at levels of 22.08, we can assume P/E ratios are pretty high from a historical perspective (not only from the past 10-15 years) and there is a high probabilty they can revert to the mean (levels of aprox P/E 15).
History is not a magic ball but it´s what we have to make inference, of course this means that past performance does not determine future performance (however I believe it can give us an idea of how markets can react in the future caeteris paribus). As Robert Shiller says, markets can keep pretty irrational for some time (in my modest opinion this is happening at the moment due to FED policy), but not forever. 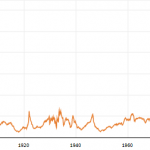 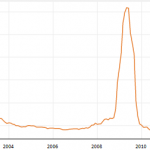