Prepare for a BIG down move in U.S equities as rates rise.

Since 2008 financial crisis, stock market prices have been driven by an expansive monetary policy followed by the FED via extremely historical low interest rates (photo 1) and QE program. If we look closer to the S&P 500 and compare it to FED´s balance sheet (photo 2) you can observe a positive nearly perfect correlation between them, which makes clear what has been the main driver in equity prices.

Revenues have risen not because companies have become more competitve, but because they have leveraged to acquire new companies due to low cost of borrowing money, making total revenue higher. Just as Carl Icahn says in a recent video, stock buybacks have driven stock prices higher in companies with extremely high P/E multiples. What will happen to revenues when money starts to get more expensive (due to increasing rates) and companies are not encouraged to acquire other companies? They will fall, and stock prices will fall with them.

Just look at the main image of this post 1991-2015 (from an update I made last week), aside of valuations, from a historical technical perspective, the S&P 500 is also extremely overbought. Historical Q-ratio also shows the market is extremely overbought (photo 3). Sometimes we need to look a longer timefrimes to realise the magnitude of the turmoil it´s about to come. Although most investment banks claim this is only a small correction, I believe it´s going to be a pretty big one making the S&P move down to at least 1700 points, the difference with 2008 is rates can´t move lower (only more QE will avoid slump by maintaining prices artificially).

Time will tell who is correct but don´t forget banks need buyers when they sell assets in their books. Nobody would buy them if they announced a severe market drawdown (at least in my modest opinion). 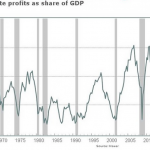 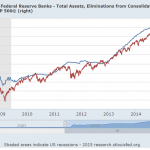 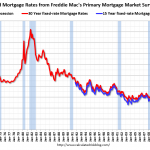